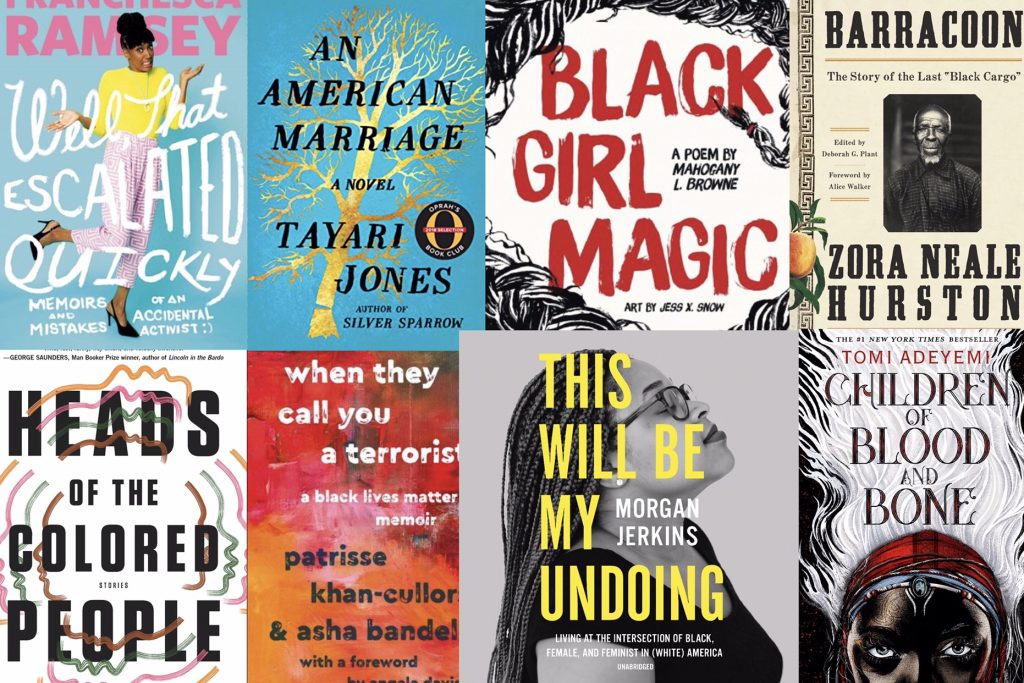 Black excellence is putting its stamp on the publishing industry.

With more attention given to the lack of diversity within the publishing industry, it seems more publishers are taking steps toward improving the statistics and bringing balance to an industry that has long ignored works by women of color. While they still have a long way to go, this year has already seen a remarkable number of published works authored by black women in several categories.

Here are some of the best titles released this year to add to your summer reading list.

THIS WILL BE MY UNDOING – Morgan Jenkins
Fans of Roxane Gay’s “Bad Feminist” and Chimanda Ngozi Adichie’s “We Should All Be Feminists” will love Jenkins’ brutally honest debut collection of essays on what it means to be a black woman today. Weaving together her commentary on pop culture, black history, feminism, and misogyny with her own personal experiences Jenkins explores the social, cultural, and historical oppression of black women.

WHEN THEY CALL YOU A TERRORIST – Patrisse Khan-Cullors
Patrisse Khan-Cullors and Asha Bandele’s powerful memoir tell the story of the co-founding of the Black Lives Matter movement. From an impoverished childhood in a community bullied by law enforcement to a deeper dive into how and why Cullors started the movement that would empower a community to fight back and seek justice for the unnecessary death of black people at the hands of a lawless justice system.

HEADS OF THE COLORED PEOPLE – Nafissa Thompson-Spires
Nafissa Thompson-Spires’ collection of stories examines black identity and today’s middle class in timely and darkly funny vinagrettes. From two mothers exchanging snarky quips through notes left in their kid’s backpacks to a young girl’s pondering on the best way to notify her Facebook friends of her upcoming suicide. The issues are real, serious and Spires navigates each topic deftly with a dark humor.

EVERY DAY I’M HUSTLIN’ – Vivica A. Fox
Vivica A. Fox latest is a guide to getting your mind right with positive encouragements and lessons learned during the actress’s long career in front of the spotlight. Filled with empowering messages on “going out there and get what you want” Fox shares everything from daily strategies for success in business, behind the scenes advice she’s gotten from co-starts that’s changed her life, to revealing beauty secrets that’s kept her looking youthful.

WELL, THAT ESCALATED QUICKLY – Franchesca Ramsey
Fans of comedians Issa Rae and Phoebe Robinson will enjoy this debut collection from MTV’s Decoded star Franchesca Ramsey on becoming an accidental activist after a viral video led to opportunities she never imagined. Using her personal experience Ramsey explores all the ways we communicate with each other, gives advice on dealing with internet trolls (always best if you don’t) and her wins and losses in activist debates between friends, misguided family members and celebrities.

BARRACOON – Zora Neale Hurston
From the author of “Their Eyes Were Watching God” comes the true story of the last known survivor of the Atlantic Slave Trade. In 1972, Hurston traveled to Alabama to interview Cudjo Lewis, the 95-year-old survivor, who gave her a firsthand account of the raid that led to his capture and bondage fifty years after the slave trade was outlawed in the U.S.

AN AMERICAN MARRIAGE – Tayari Jones
Jones’ latest novel is a timely story in which newlyweds, Celestial and Roy, on the verge of having it all have their lives torn apart when Roy is found guilty of a crime he didn’t commit and sentenced to twelve years in prison. Left bereft, Celestial finds solace in the arms of her childhood friend Andre and loses the love she held for Roy as each year passes. After five years, Roy’s sentence is suddenly overturned and he’s heading home to continue the life he once.

MEM – Bethany C. Morrow
Bethany Morrow’s “MEM” brings forth an original tale that questions what it means to me human. Set in the 1920s, a scientist has discovered how to extract memories from people. The memories, or MEMs, are mirror images of their source and stuck in the loop of their extraction–all except for Dolores Extract #1 who is different from all the others. When Dolores starts to make her own memories it calls into question ownership, identity, and humanity in this powerful and dense novella. Fans of HBO’s Westworld and Netflix’s Altered Carbon will also love this speculative story.

THE WEDDING DATE – Jasmine Guillory
Guillory’s debut novel is a perfectly fun and quirky summer read. When Alexa becomes trapped in an elevator with a stranger the last thing she thought she’d be doing is agreeing to be his pretend date for his ex’s wedding but in an uncharacteristic move she agrees and soon finds that may be there’s something real under the farce of their fake relationship.

BLACK GIRL MAGIC – Mahogany L. Browne
“Black Girl Magic” is a collection of poems that challenges the conditioning of society that tells black girls they don’t belong. An ode to black girls everywhere this collection features anthems of strength and empowerment while inviting readers to find magic within themselves.

THE BELLES – Dhonielle Clayton
The co-founder of #WeNeedDiverseBooks pens the first novel in a new and original young adult fantasy series that explores obsession, greed, and power. Camilla is a Belle, a decedent of the Goddess of Beauty, whose job it is to control beauty in a world where everyone is born gray and damned. But beauty is horded by those with riches and power and Camellia soon finds out that being the Queen’s favorite comes at a high-risk and everything she’s known about her existence is a lie.

CHILDREN OF BLOOD AND BONE – Tomi Adeyemi
Tomi Adeyemi’s debut novel is one of those books you take your time reading out of fear of reaching its end. The first novel in a new fantasy series for young adults, weaves magic and west African culture together to create a world brimming magic. Magic has disappeared from Orisha after a ruthless king murdered all the maji leaving Zelie and her brother without a mother and imprisoning its people under heavy fines they can’t ever pay. When a rogue princess appears with a magic scroll that can restore the magic back to her people Zelie sets out to strike back against the king restore magic for good.

MONDAY’S NOT COMING – Tiffany D. Jackson
Tiffany Jackson’s latest novel is a young adult thriller ripped from the headlines. Inspired by the story of missing black teen girls in Washington, DC, “Monday’s Not Coming” is a heartbreaking story in which one girl fights to find her friend and be heard by the adults who haven’t noticed that she’s gone.

Interested in young adult books? Sign up for our monthly subscription service and get the best new stories delivered to you each month. Find out more here.

This Beauty Mogul Wants To Make You a ‘BAW$E’