Admit it since the #OcarsSoWhite backlash of 2015 you’ve been side-eyeing every award show. You probably sat this one out, feeling vindicated, thinking you didn’t miss anything with all the reports that La La Land has swept up a record-breaking number of awards at the 74th Annual Golden Globes Awards last night.

But you’d be wrong.

Yes, everyone did go “la-la” for La La Land but you actually missed some seriously significant moments.

In its 74 years, this was the most diverse group of nominees the award show has ever seen with Black women and men being represented in 16 of the 25 categories. 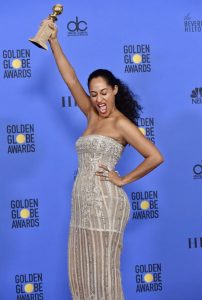 Tracee Ellis Ross
made the entire night with a win for Best Actress in a Musical or Comedy TV Series. It’s a huge win for the star who has been nominated eight times before and is the first Black woman to win since Debbie Allen in 1983. In accepting the award she gave thanks to the women who are often not considered.

“This is for all of the women, women of color and colorful people, whose stories, ideas, thoughts are not always considered worthy, and valid and important,” Ross said. “But I want you to know that I see you. We see you. It is an honor to be on this show, ‘black-ish,’ to continue expanding the way we are seen and known, and to show the magic and the beauty and the sameness of a story, and stories that are outside of where the industry usually looks.”

Shortly after, Atlanta creator and star, Donald Glover, received the Golden Globe for Best Comedy Series, giving a brief thanks to “Atlanta and all the black folks in Atlanta” for “being amazing people.” He later went on to win the Globe for Best Actor in a Musical or Comedy TV Series.

For us, the night belonged to Viola Davis who arrived in a stunningly vibrant yellow gown. Highlighting the mega-star she is. And why shouldn’t she? Davis began the week at the unveil of her very own star on Hollywood’s  Walk of Fame and continued with a win for Best Supporting Actress for Fences while going head-to-head with Octavia Spencer (Hidden Figures) and Naomi Harris (Moonlight). Even when the announcer flubbed the name of the movie, calling it “Hidden-Fences” (yeah because it’s all the same to some people) for the second time of the night –nothing could dim the moment.

Hollywood newcomer, Issa Rae didn’t receive an award for her HBO hit Insecure but she did leave her mark by addressing the issue with normalizing President-elect Trump’s behavior during her red carpet interview.

Willow Smith Being Herself

Politics were not skipped during the show. After receiving a tribute from Viola Davis, Meryl Streep took the stage to speak of her heartbreak at the election results while accepting the Cecil B. DeMille Award.

It was an exciting night for all and for us we hold closely each win and what they represent. Every story being recognized is another story about to be made.

If you want to see if for yourself you can catch the Golden Globes online at NBC.