In the eyes of the law, dreadlocks are not mutually exclusive to the African-American race and banning them from the workplace isn’t racial discrimination.

Last week, the 11th U.S. Circuit Court of Appeals decided, 3-0, to dismiss the Equal Employment Opportunity Commision’s lawsuit against Catastrophe Management Solutions, an insurance claims processing company in Mobile, Ala., for refusing to hire Chastity Jones back in 2013.

Jones was offered a customer service position by the company but was asked to cut her dreadlocks to comply with its personal grooming policy. When she refused to alter her hairstyle Catastrophe rescinded their offer of employment.

The EEOC stated that prohibiting dreadlocks in the workplace discriminates against African-Americans because the hairstyle is physiologically and culturally associated with the race.

But the federal appeals court sees it another way. As reported by The Wall Street Journal:

Federal law bans employment discrimination on the basis of race. And courts have interpreted that to mean discrimination based on skin color and other “immutable traits.”

Atlanta-based 11th Circuit Judge Adalberto Jordan, a President Obama appointee who wrote the appellate opinion, said he recognized that definitions and understandings of race can change over time.

“We would be remiss,” he wrote, “if we did not acknowledge that, in the last several decades, there have been some calls for courts to interpret Title VII more expansively by eliminating the biological conception of ‘race’ and encompassing cultural characteristics associated with race. . . As far as we can tell, every court to have considered the issue has rejected the argument that Title VII protects hairstyles culturally associated with race,” he stated. . .While the definition of discrimination isn’t fixed, it’s a debate to be conducted “through the democratic process,” not by courts, he wrote, affirming a lower-court ruling.

The news comes amid recent reports of fashion designer, Marc Jacobs, firing back at critics who claimed the designer culturally appropriated dreadlocks for his New York Fashion Week show. Jacobs took to Instagram (in a now deleted comment) to address the criticism stating “. . .all who cry ‘cultural appropriation’ or whatever nonesense about any race or skin color wearing heir hair in any particular style or manner-funny  how you don’t criticize women of color for straightening their hair. . .” 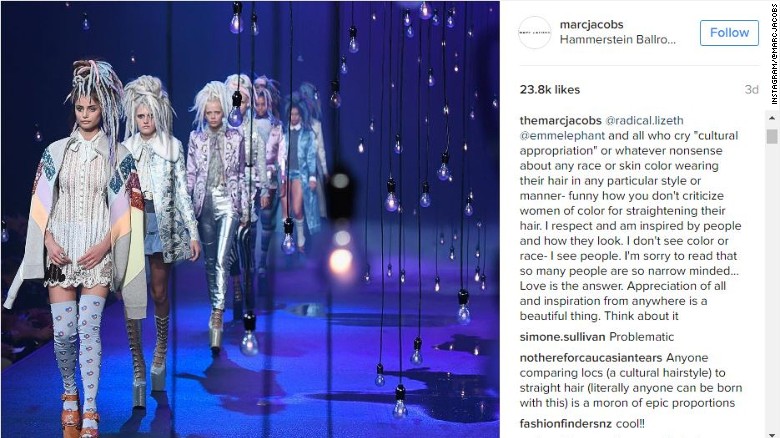 With this latest blow we can expect to hear more incidents of people losing their jobs because their hair is considered inappropriate for the workplace. Or reports of students being asked to tame their natural hairstyles like South African students were protesting against earlier this year.